Home/News/Schools design challenge is a great success
Previous Next 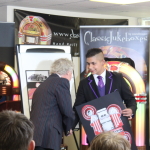 Whilst visiting our own Children’s school a few years ago, my wife and I were astounded that students were still designing and making the same plastic key rings that we made 30 years previous, even though there are some fantastic technologies available such as 3d printers, CNC machines and more computer power than we could ever have dreamt of. It was at this point that we began to contact various local schools and meet with the heads of year to see what we could do to help inspire students, during this process we were introduced to Megan Taylor and Sami Holmes at the Ahead Partnership and formulated a plan to introduce students from a local school to the world of design and manufacture.

As a family business, we strongly believe that links with the local community and especially with schools, is paramount to our success. For many years we felt disappointed in the way that manufacturing was portrayed by politicians and the media, being the poor relative to banking and call centres. Many students were being pushed towards university, no matter what their academic skills and with little consideration as to whether the degree they achieved would be of any use to them when they left. However, over the past 4 -5 years we have witnessed a seismic shift by the policy makers, with much more emphasis being placed on apprenticeships and preparing students for life in business. We are 100% behind this initiative and are proud to be involved at the grass roots level, hopefully making a difference to the next generation and employing many apprentices throughout the company.

The Leeds East Academy students first visited prior to the summer holidays, they had a factory tour and met with various members of the SL team who discussed the role of design and engineering and the role that it plays in our business. We used an example of the Crosley Rocket 42, a Jukebox that we had just designed for a distributor in America who runs a Nascar race team. We explained the coloration between the racing car and the Jukebox. Sound leisure’s brand manager, Joe Armitage then set the students a task to design their own hot rod inspired Juke. Today they returned to pitch their ideas to Alan Black, company founder, Catherine Black, Joe Armitage and myself “The Dragons”. We were genuinely astounded with the commitment and effort that was displayed by all of the students. They have spent many hours on the project during class time and also after school. Some of the ideas were fabulous and even though some were not used to standing up in front of a room of people and pitching an idea, they were a credit to themselves and the school.

Following half an hour of deliberation the joint winners were announced and gift tokens distributed. We have received some fantastic feedback already, just an extract of some of the comments are shown below.

It seemed to us that the whole group gained something from today and we are immensely proud that the Sound Leisure team has been part of this project. We are sure that all of the students involved enjoyed the project and found it much more interesting than designing a key ring!

We look forward to welcoming the next class early in 2016